Today, the supply of virtually any products and services significantly exceeds the demand. So, one of the most fireproof ways to set a business apart is impeccable, 5-star service. Not only does it need to be perfect in terms of quality, but also as speedy as possible, and here is where customer support software plays an extremely important role.

The solution that is well fit for the needs of a specific business can multiply the efforts of the support team. And, vice versa - making the wrong choice can produce a bottleneck, resulting in lost financial resources and customers.

So, today the dilemma is Zoho Desk vs Zendesk. If you’ve already started studying this issue, you might have noticed multiple similarities apart from the names between the two platforms. We will try to sort them out so that you pick the right one.

Zoho Desk is a part of the Zoho suite of cloud-based apps. It was released in 2016, as an addition to Zoho Support help desk software. The tool mostly aimes at SMBs, although it offers Enterprise pricing plan, however, the feature set might not suffice for enterprise-level businesses. Zoho Desk has very reasonable pricing and an extensive feature set, which makes it a good value for the money. Naturally, it seamlessly integrates with other Zoho products, including Zoho CRM, which ensures data completeness and synchronization for the benefit of better customer service. Companies like Sears, Intel, Daimler, Essilor, and others use Zoho Desk as their platform.

Founded back in 2007, Zendesk can boast quite an experience in the customer support sphere. It is a very popular help desk app, but it’s hard to say it really stands out of the pack. On the one hand, it has a robust feature set. But then it comes to price, it is higher than in Zoho Desk. Zendesk is a good fit for small and midsize businesses, as well as for larger companies. However, the features necessary for them are found in the more expensive pricing packages. It presents countless integration opportunities with the third party add-ons, as well as API.

Zoho Desk and Zendesk Support have a lot in common when it comes to the basics.

As to the differences between Zoho Desk and Zendesk Support, they boil down primarily to pricing and some specific functionality.

While both platforms offer free, no-credit-card-required trial, Zoho also has an attractive Essential plan, and free for up to 3 agents. These make it a viable choice for freelancers or startups on a shoestring budget.

Zendesk’s cheapest plan costs $5 per agent/month (as of now). The difference is even more felt when you compare Enterprise plans - Zoho’s costs €25 per agent/month, while Zendesk’s offer is $99, which is almost 4 times more expensive! However, don’t jump to conclusions until you check what features come with each plan. 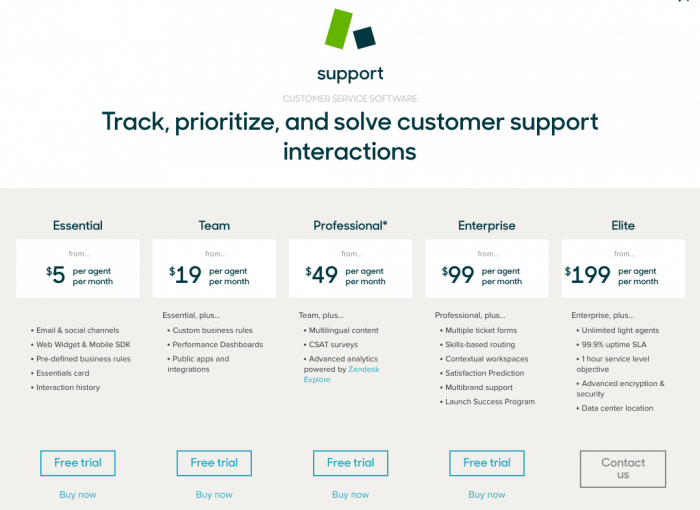 If you choose Zendesk, beware of the possibility of additional expenses, like an extra fee for Zopim Chat or Zendesk Voice apps, or any training aside from “Getting started which comes with the subscription.

Zendesk offers basic ITIL incident management, which is necessary for a service desk, But at the same time, this can let raise problems using a help desk. For some businesses, it might be very convenient. Zoho Desk doesn’t have this feature at all.

What are the users’ impressions?

We’ve researched the popular review websites Softwareadvice and G2 Crowd to see what is the opinion of the users of both help desks in question. Here’s what we’ve found.

Formally, users rate Zoho Desk higher. However, we should take into account the impressive difference in the number of reviews and only a slight difference between the competitors’ ratings. After that, it would be fair to say that both platforms are pretty much on the same page.

We also analyzed the user reviews and found the most typical pros and cons of Zoho Desk and Zendesk Support and organized them into the table below.

Overall, the battle Zoho Desk vs Zendesk Support doesn’t have a winner. Both are the robust high-quality solutions that belong to the number the front runners of help desk software. If you have difficulty choosing between the two, consider your budget. Zoho Desk is less costly, while Zendesk offers more power, but the prices, especially for the plans with sophisticated features and for more agents, are quite high.

Of course, an ultimate way to decide between the two platforms is to try them out using free trial periods. Remember, there is no right or wrong choice - it is all up to you.

Is HelpSpot the Next Big Thing? — Check Our Review!

Here Are Top 10 Helpdesks That Are Made for Healthcare

Here are 8 Desk Software Solutions Made for Educational Institutions