Our support team will be temporarily unavailable on March 8, 2021, due to the public holiday. If needed, please check our help center or fill in the contact form, and we will get back to you on the following day.
Help Desk System Reviews

With more and more help desk systems released, finding one can be a challenge in of itself. On one side you have a bunch of budget offerings whereas on the other, refined premium tools that mean business and only.

Two such systems are Zoho Desk and Zendesk. Both share a lot in common and both try to compete with one another for the throne, and frankly, they come very close. Yet, which one is for you? Is it Zoho or Zen that will power your business operations? Let’s find out!

Now before we jump guns blazing, let’s take a moment and see how each platform stands on its own. That way we will have a clearer view of the tool, as well as we will be able to identify what each platform holder tries to focus on and what are their plans for the future.

We’ll start with Zendesk. Released back in 2007, Zendesk has become a goliath of a platform. With customers such as Uber, Adobe, and Vodafone under their belt, Zendesk has established itself as a premium help desk solution that is capable of handling huge, multi-billion dollar companies.

With customers such as Uber, Adobe, and Vodafone under their belt, Zendesk has established itself as a premium help desk solution that is capable of handling huge, multi-billion dollar companies.

The key focus of the system is the scalability and stability of operations. This is clearly reflected in the tier list as regardless of what kind of plan you pick, there’s always room for scaling.

Then there’s the fact that a feature is only released in a finished state. It will do exactly what it sets to do.

Another important aspect of Zendesk is that it is perfect when it comes to user experience. You will have zero troubles finding toggles, menus, users, etc.

Last but most certainly not least, Zendesk has everything in terms of basic help desk functionality. Tickets? Check! Reports? Check! Dashboards? Check! It really is an all-in-one help desk solution. Currently, Zendesk set its sight on AI chatbots and self-service options which is suffice to say, what most companies focus on. The future is behind this tech and we are more than glad to see Zen doings its part of the job!

Now looking at Zoho Desk, it is immediately clear that the company takes pride in its massive list of features. The key approach of the system is to provide companies with the right amount of tools. They want to be a swiss army knife of help desks and it shows. You won't be bothered that you lack feature A or feature B at all as everything comes in a nicely wrapped package.

Zoho Desk wants to be a swiss army knife of help desks and it shows.

With customers such as Uber, Adobe, and Vodafone under their belt, Zendesk has established itself as a premium help desk solution that is capable of handling huge, multi-billion dollar companies. And speaking of the package itself. The system is very intuitive and it doesn’t take a genius to use it.

The system is very intuitive and it doesn’t take a genius to use it.

The designers made sure that you won’t be overwhelmed with menus and toggles by strategically hiding these settings under sub-menus. The company serves some well-known brands such as Intel, Jaguar, McAfee, among others. And just like Zendesk, Zoho has it’s own AI system dubbed Zia (more on that later). The main focus of this system is the quality and number of features.

Alrighty, now that we covered the basics, let’s talk about the exclusive stuff. In this section, we will not only describe the main features but how can you apply them to your company. In other words, we’d like to present the real-life value of the said function. Thus, let’s get started!

Just like last time, we’ll start with Zendesk. So, one of the most interesting features of Zendesk is the Satisfaction Prediction module. 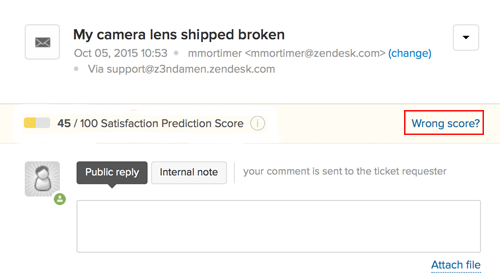 The basic idea behind this system is to allow you to get better, or more appropriately, a more thorough understanding of your conversion rate. Essentially, during the conversation, the system allows you to make changes and take the conversation in another direction the moment such a need arises. Another important feature point of the system is that it can rate the interaction too. This makes the review process miles easier and faster.

Then there’s the fact that you can use said score to gauge the relationship level. With this system, you can easily respond to situations by setting up a rule. In other words, the system will identify a conversation that is going downhill and notify you about it. This will allow you to not only retain a potential customer but will make sure that your brand stays only in a positive light. Finally, you can employ Zendesk Explore to identify how you can help the system be even more accurate and helpful.

This feature will prove very useful for smaller businesses that have a constant stream of customers. It will also benefit greatly those who are aiming for a specific segment of potential buyers. The tool is only available if you have an Enterprise plan, however. If you want to learn more about the tool, you can head over here!

Looking at Zoho Desk, there is one thing that really sets our expectations high. It’s their chatbot system. It’s not your average chatbot mind you. It is a complex, AI-powered, system utility that can accomplish a myriad of things on a number of devices (yes, it’s not limited to just desktops).

So, firstly, the system can be integrated and accessed in a number of ways. Whether its a website or a mobile app, your customers can ask Zia questions and get accurate answers (that are based on your knowledge base content) and/or notify your staff what solutions didn’t help so you won’t have a loose end. Even more, you can teach Zia to do things for you, including placing orders and editing tickets.

Another important thing to mention is that Zia understands the context of the conversations.

An example of how Zia determines the tone of the conversation. Source: Zoho Desk

She literary can “read between the lines”, meaning that she will send the best possible response at all times and in case something goes haywire, she will place tags that you can later use as references. For example, if the question is about poor wireless reception, then the tag will be appropriate, communication. This will allow your agents to coordinate much faster and more effectively. And in case Zia doesn’t know what tag she should place, she will ask you directly.

Last but not least, Zia is capable of predicting anomalies in your performance profile. In other words, if you have a ton of incoming tickets, Zia will let you know about it so that you can assign more people to the upcoming task. This will prove to be mega useful in smaller teams and companies where every man-hourясн is of utmost value.

Alright, as you can see, both systems have a lot to offer and they are not standing still in that regard. Although, with so much being added, it becomes a matter of price and this where the real battle starts. We decided to take a look at the top tiers and stack them up to see which one delivers the most. The reason? The above-mentioned tools are only available on higher tiers. Let’s take a look at the figure down below to get a better idea.

Note: The following figure does not include all the features, for more information, please visit the official website of each vendor respectively.

As you can see, both tools seem to share a lot in common but when taking into consideration the pricing, it’s clear that Zoho is the winner. Keep in mind that the fact that Zoho is the winner doesn’t mean that it’s the better option. Both tools provide fantastic features and there is no clear winner, which leads us to a conclusion.

Comparing Zendesk vs. Zoho Desk, one can say they're both amazing systems with phenomenal features. We can’t really pick a winner here as each of them is amazingly similar to one another. Instead, we suggest that you at least try the trial versions of each tool. This will provide you not only with first-hand impressions but will help you understand better what tool is best suited in your case.

But that about wraps things up for this analysis. Be sure to leave us a message if you have any questions about the tools or anything related to help desks. Our specialist will get in touch with you in no time but for now, that’s all we have!

Help Desk for BigCommerce: Choosing the Right Solution for your Business

Desk.com vs Freshdesk: The Alternative for Soon To Close Help Desk